“After doing a 100-mile ultramarathon in March, I was ready to go for a record – with Memorial Day coming up the time was right,” said Davis. “I threw the idea out to Rhapsody CrossFit Head Coach Alan Shaw and, soon enough, that idea became a plan.”

Davis adds that he has friends in the military and the timing and choice for this attempt was significant. “I see military service as entirely selfless. This attempt was the least I could do to honor them and show my gratitude.”

Named after Lieutenant Michael P. Murphy, a Navy SEAL killed in action in Afghanistan on June 28th, 2005, Murph is a commemorative workout done by athletes around the world every year on Memorial Day.

“Murph is, hands down, one of the most challenging workouts in CrossFit, but it’s about so much more than being a tough benchmark,” says Rhapsody Head Coach Alan Shaw. “It’s what we as a community do to thank and pay tribute to those who gave their all for us.” 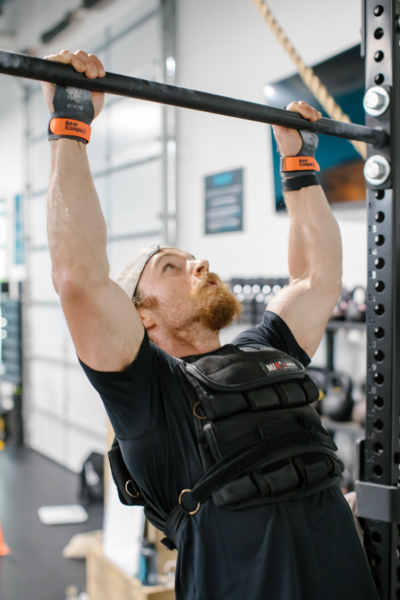 Known in CrossFit circles as a “Hero” workout, Murph consists of:

*The prescribed standard is to do the workout in a weighted vest (20 lbs.) to represent body armour.

By completing 16 rounds of Murph, Davis ran 32-miles and accumulated 1,600 pull-ups, 3,200 push-ups and 4,800 squats in less than 24 hours. His attempt was part of a Memorial Day event hosted by Rhapsody CrossFit in Charleston, SC at which 150 athletes signed up for heats from 6PM on Sunday, May 24 through 6PM on Monday May 25.

“I heard every word of encouragement and saw every smile,” says Davis. “The reason I came to Rhapsody was to get pushed – beyond my limits and outside of my comfort zone. I couldn’t have done it without them.”

For his next challenge, Davis may run the length of South Carolina or sign up for his first CrossFit competition this summer. His Murph application to the Guiness Book of World records is under review.

While under enemy attack, Lieutenant Michael Murphy knowingly left his position of cover to communicate his team’s location and request support. For his sacrifice and bravery, he was posthumously awarded the Congressional Medal of Honor.

Murphy regularly performed the workout we know as “Murph” today as part of his own training. Every year, CrossFit gyms and fitness communities choose to do Murph to pay tribute to all of those individuals who have sacrificed something for us. This workout reminds us of Lieutenant Murphy and all the other heroes who have died for our freedom.

To learn more or schedule your first class, click here.