When you’re first getting started with CrossFit, one of the first movements you’ll learn is the air squat. And it’s an exercise that you’ll continue to practice over and over again. At first, this might be surprising because it seems like such a basic movement. But the reason why you start with the air squat and then keep refining it is that it forms the foundation of many other movements. And once you begin to break down the squat, you’ll find that it’s much more complex than you might think.

Taking the time to learn and perfect the points of performance of the air squat prepares you for weighted squats, like the back squat, as well as for more advanced movements. 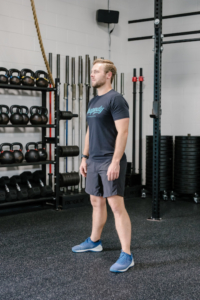 Good technique always comes before intensity. The points of performance for the air squat will ensure that you’re moving correctly and efficiently. At the same time, they create movement standards that determine what counts as a complete and valid rep.

Stand with feet shoulder-width apart, knees and hips extended, toes slightly pointing out. The heels will stay in contact with the floor at all times.

Descending into the Squat

Always initiate the squat from your hips rather than the knees while keeping weight in the heels. With the knees tracking over the toes, the hips will first move slightly back, then down. 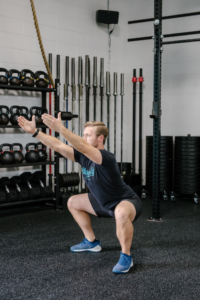 The goal is for the hips to descend lower than the knees; the hip crease should be below the knees. Even in the bottom of the squat, maintain the curve in your lumbar spine by keeping the chest lifted and core engaged.

Back to the Starting Position

Driving through the heels, rise back up to the starting position and come to full hip and knee extension.

Remember, even a (seemingly) simple movement like the air squat is worth taking the time to learn properly. Not only will you notice a difference in your workout performance, but your future body (and its lack of pain or injury) will appreciate the effort.