Mapping back to middle school, Meredith’s shoulders started giving her grief during her days swimming with a competitive club team based out of Atlanta. Assured it was merely growing pains, she forced her way through mounting misery until a breaking point finally led to a physician diagnosing her with “swimmer’s shoulder”.

“Throughout my high school career I continued to swim, but I was never not in some kind of discomfort – there’s just no way to not use your shoulders in swimming,” said Meredith. “It was incredibly disheartening and I lost my love for the sport, giving it up by the time I enrolled at the College of Charleston.” 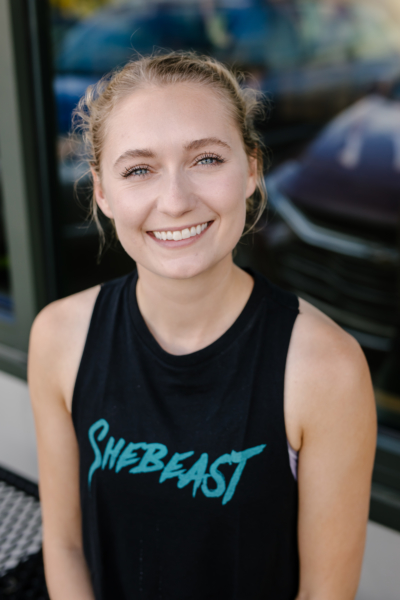 At a high level, “swimmer’s shoulder” is a condition in which the tendons in the shoulder become inflamed, pressing on nearby bones, muscles and other tendons. With this syndrome, pain tends to be constant and increases with use or strain.

In an attempt to avoid aggravating her shoulders, Meredith stayed active through HIIT style workouts until a friend talked her into trying a CrossFit class – one clean and she was hooked on the barbell. Although her love affair with Olympic Lifting was quick, so was the excruciating flare-up from her adolescent injury – devastated, she put CrossFit on the backburner, convinced it could not be a space for her.

Fast forward a few months and, once again, with a dear friend’s intervention, she found her way to Rhapsody Fitness in Charleston.

“From the moment I met Alan and Trinity, my awkward, quiet little self felt so seen and heard and welcome that I knew it was going to be a life-bettering decision,” said Meredith.

Although her long-standing injury was still an issue, now Meredith had a team of coaches around her dedicated to practicing patience, showing kindness and insisting on helping her not only recover from a decade-old condition, but stay active during the process. Team Rhapsody also brought in backup recommending Nate Jones with Be Better PT for the ultimate full-court press.

“Without fail, every time I walked into Rhapsody, my coach asked me how my shoulder was, how PT was going, and, specifically, talked through what I thought about certain movements in the workout that may give me trouble,” Meredith recalls. “Every coach worked with me on modifying movements in different ways and consistently checked in on me throughout the workout – I just felt so unbelievably supported, seen and cared for.”

With time, patience and persistence, Meredith was able to do her first strict press without pain. Met with an ugly cry and unbridled celebration, this small step hallmarked a turning point in her recovery that within 4 short months led to overhead squats, hanging from the rig, and more shoulder-dominant movements she had previously thought would never be within reach.

“CrossFit in and of itself is so empowering…there is a modification for every single movement,” said Meredith. “No matter what, you’re going to get good work in and you can push yourself to the fullest regardless of what the workout might be.”

As she continues to gain strength, stamina and confidence inside and outside the gym, Meredith insists that CrossFit is, in fact, for everyone regardless of skill level, age or ability. For her fellow athletes struggling with a nagging injury, she insists on staying the course, giving yourself grace and welcoming help.

“When you’re surrounded by friends and coaches who support you unconditionally, it becomes much easier to bask in all the little wins as opposed to revelling in what you may not be able to do.” Meredith adds. “If you ever feel alone or frustrated, look around the room and plant yourself in the moment with all your fellow misfits knowing that your coaches and peers have your back.”

Looking to get back into the gym after an injury? Let Rhapsody be part of your recovery. To learn more about Rhapsody Fitness in Charleston and our range of programs, get in touch with Team Rhapsody today.