Building on the technique used in the shoulder press and push press, the push jerk is the most efficient way to move heavy loads overhead. And as one of CrossFit’s foundational movements, it requires proper technique, coordination and timing.

The set-up for the push jerk is similar to the shoulder press and push press. The difference with the push jerk is that after dipping, driving and extending the hips and legs, you rebend the knees and catch the bar in a partial squat.

The push jerk can sound (and feel) complicated. But by practicing the following points of performance, you’ll be able to put it all together successfully.

Start by standing with feet under hips. Take a full grip on the barbell with hands just outside shoulders and elbows slightly in front of the barbell.

While keeping the core tight, dip straight down by bending the knees. Keep the torso vertical.

Quickly extend (open) the hips and legs before dropping under the barbell and driving it overhead. Land in a partial squat with the barbell overhead.

Complete the movement by coming to full hip, knee and arm extension before lowering the barbell back to your shoulders. 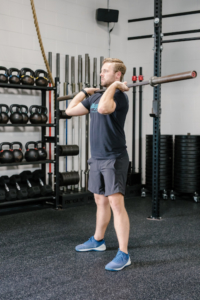 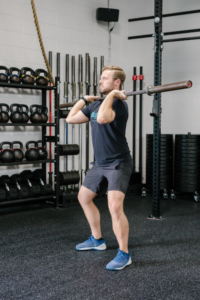 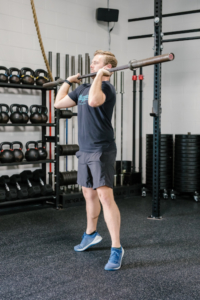 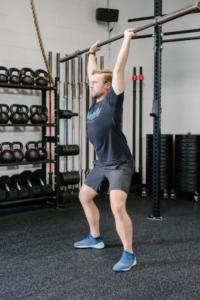 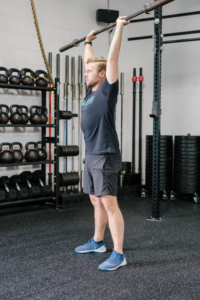