The shoulder press is one of the nine foundational movements in CrossFit. It’s also known as the strict press or the overhead press. The shoulder press is called a “strict” press because you get no assistance or transference of momentum from your lower body when moving the bar overhead. However, the core and hips are still engaged as they create stability while pressing a load overhead. 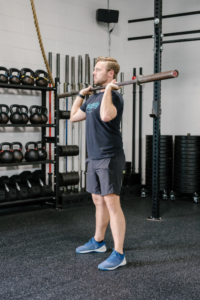 Just as the squat forms the foundation for more complex movements, the shoulder press is the first step in learning and refining overhead movements like the push press and push jerk. Practice these points of performance and you’ll not only build upper body strength, but you’ll also improve your technique for more advanced movements.

Stand with heels directly underneath hips and the barbell in the racked position. With a full grip on the bar, hands should be just outside the shoulders with elbows slightly in front of the bar.

With the core tight and engaged, press the bar up and overhead until arms come to full extension. As the barbell travels upward, move the head back and out of the way. 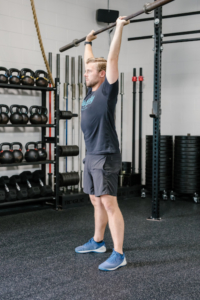 Arms are at full extension with the body tight and core engaged.

Bend the elbows and return to the barbell to the racked position.